Cu Chi - The stamp of time.

Cu Chi, Vietnam - The rattle and pop of automatic weapons greet a visitor. Young women in the black pajamas of the Vietcong flit through the woods. A man in green fatigues picks his way down a narrow trail, leading a small platoon of foreign tourists.

This is the site of the Cu Chi tunnels, one of the most famous battlegrounds of the Vietnam War. Today it is one of the country's prime tourist attractions, part of a new industry of war tourism. Sometimes, these spots seem to be memorials to wartime propaganda as much to the war itself.

Following the man in green fatigues, the tourists arrive at an open-sided hut, where the women in black show them to their seats. There, on a big-screen television set, the Vietnam War plays on: B-52's drop strings of bombs, villagers run for cover, communist guerrillas fight back.

For those who still don't get the message, a narrator says:

"Cu Chi, the land of many gardens, peaceful all year round under shady trees ... Then mercilessly American bombers have ruthlessly decided to kill this gentle piece of countryside ... Like a crazy bunch of devils they fired into women and children ... The Americans wanted to turn Chu Chi into a dead land, but Cu Chi will never die." 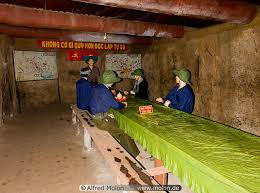 Knitting past and present jarringly together, the gunfire in the film mingles with that of the nearby firing range, where visitors can pay $1 a bullet to shoot an AK-47 rifle.

Since the war ended in 1975 with a communist victory, Vietnam has rebuilt and moved on. It is almost impossible to find anyone who still talks like the soundtrack of the Cu Chi film. Even the young women in black, who work as guides and ground keepers, dismiss the hard language, repeating instead today's government line: We're all friends.

The Cu Chi tunnels, a 75-mile-long underground maze where thousands of fighters and villagers could hide, are at the top of the list of tourist spots for Ho Chi Minh City, 45 miles to the southeast. Another is the city's Museum of War Remnants, with its displays of captured weapons and its catalog of horrors, which only recently amended its name, with changing times, from the Museum of American War Crimes.

Hue, the ancient capital, familiar to many Americans as the scene of heavy fighting in the Tet offensive in 1968, is the hub of a network of war tours. Streetside kiosks offer lists of attractions: "Khe Sanh, Dong Ha, Marble Mountain, China Beach, bombed-out church, DMZ with statue of Ho Chi Minh."

Even the site of the American massacre at My Lai has been turned into something of a theme park, with a cemetery, museum, professional storytellers and a memorial reading, "Forever hate the American invaders." 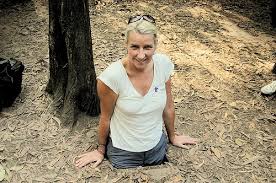 There are plans to develop the DMZ -- the wartime demilitarized zone separating the north and the south -- as well as parts of the Ho Chi Minh Trail, neither of which now offer much for tourists to see.

Despite some certain difficulties in planning this site to become a tourist attraction, Cu Chi authority has been considering some measures to upgrade its travel services to take all the advantages in here. All hope that this famous historical site will turn itself into a good place appealing travellers in Vietnam tourism.