The origin of the Khmers

Cambodia came into being, so the legend says, through the union of a princess and a foreigner. The foreigner was an Indian Brahman named Kaundinya and the princess was the daughter of a dragon king who ruled over a watery land. One day, as Kaundinya sailed by, the princess paddled out in a boat to greet him. Kaundinya shot an arrow from his magic bow into her boat, causing the fearful princess to agree to marriage. In need of a dowry, her father drank up the waters of his land and presented them to Kaundinya to rule over. The new kingdom was named Kambuja.

Like many legends, this one is historically opaque, but it does say something about the cultural forces that brought Cambodia into existence, in particular its relationship with its great subcontinental neighbour, India. Cambodia’s religious, royal and written traditions stemmed from India and began to coalesce as a cultural entity in their own right between the 1st and 5th centuries.

Very little is known about prehistoric Cambodia. Much of the southeast was a vast, shallow gulf that was progressively silted up by the mouths of the Mekong, leaving pancake-flat, mineral-rich land ideal for farming. 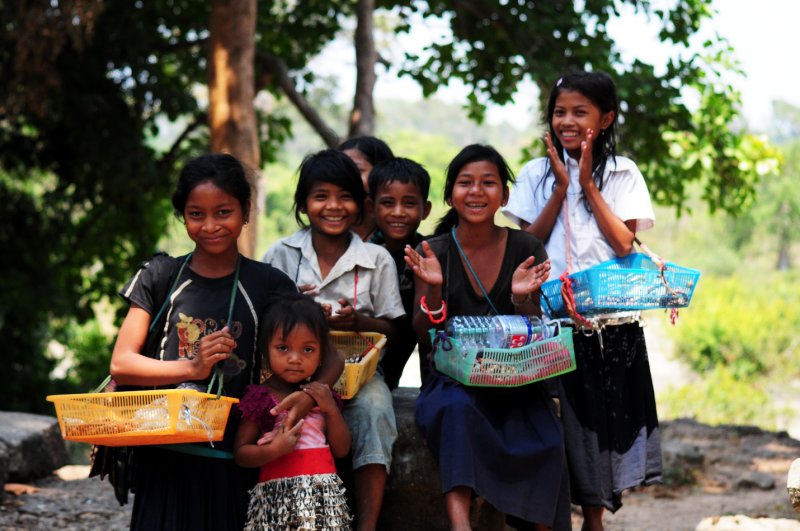 Evidence of cave-dwellers has been found in the northwest of Cambodia. Carbon dating on ceramic pots found in the area shows that they were made around 4200 BC, but it is hard to say whether there is a direct relationship between these cave-dwelling pot makers and contemporary Khmers. Examinations of bones dating back to around 1500 BC, however, suggest that the people living in Cambodia at that time resembled the Cambodians of today. Early Chinese records report that the Cambodians were ‘ugly’ and ‘dark’ and went about naked. However, a healthy dose of scepticism is always required when reading the culturally chauvinistic reports of imperial China concerning its ‘barbarian’ neighbours.